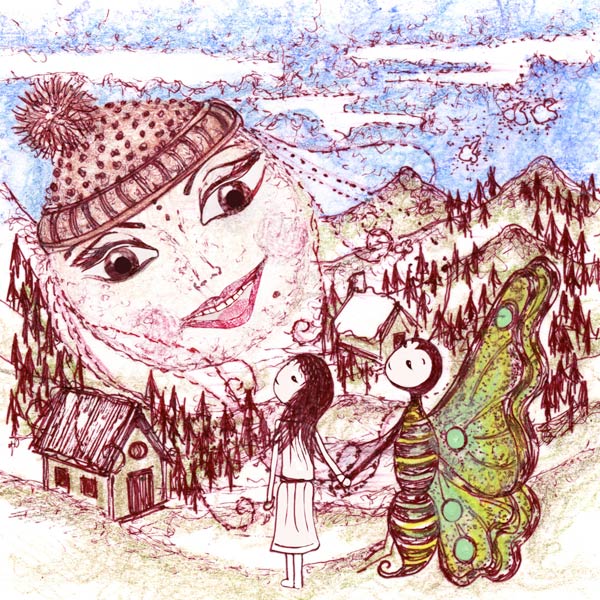 Tiny wrapped herself in the patchwork quilt, and closed her eyes to sleep. The ground shuddered. She opened them with a start. Was it an earthquake? A meteorite? She jumped out of bed and ran to the window. High in the sky stood Mother-the-Moon, shaking and shivering and looking quite miserable.
“Are you alright there, Mother-the-Moon?” called Tiny, “You look like you’re catching a chill.”
“I’m freezing, Tiny!” said the Moon through chattering teeth, “Sorry to complain, but each February I’m expected to dress up as the Snow-Moon, and in truth, I hate the cold! Sometimes my sister the Black-Moon will take my place, but she’s busy this year.”
“Shine on, Mother-the-Moon, I think you’re doing great!” called Tiny, but beneath her thin veil of enthusiasm, her heart-bird whimpered in despair.

Luna-Moth appeared at the glass, “Poor Mother-the-Moon,” she squeaked, “I’m scared she’ll get frostbite!  What can we do?”
Tiny thought for a moment, before a smile spread over her face.
“We can knit Mother-the-Moon a hat! I’m sure that will keep her warm.”
Luna-Moth fluttered her wings in excitement. It was a perfect plan.

Tiny and Luna set to work. They borrowed stalks from the moonflowers to use for needles, and plucked moonbeams from the air to spin into yarn.  Mother-the-Moon watched silently from above, wondering what they were up to. Pulling and knotting, twisting and weaving—they worked through the night, until the soft whispery strands of light had been teased into a shimmering hat, complete with a pom-pom.

Mother-the-Moon could bear the suspense no longer and glided down to meet them at the Line between Earth and Sky.  At the sight of her new hat, she beamed with happiness, and pulled it over her crown. The pom-pom wobbled, sending sparks of silver light into the star-filled sky.
“I’m the luckiest moon in the Universe!” she sang , taking a slow twirl. “February is now my favourite month of all.”
Tiny agreed, it might be the coldest, but it was filled with love.