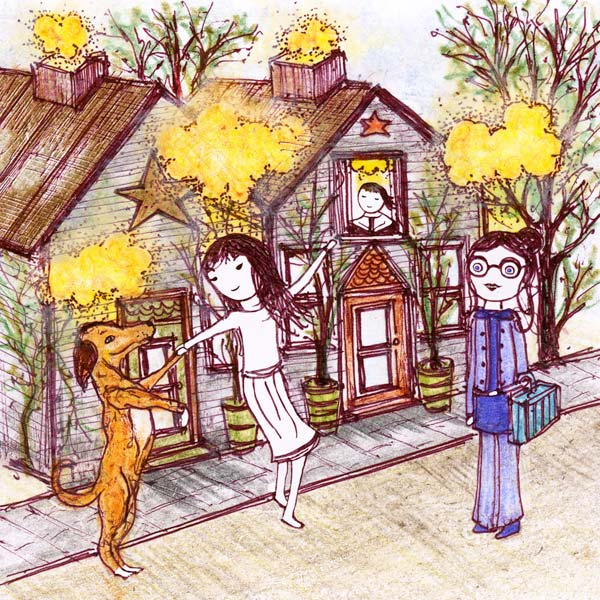 It was raining again in Treetops; the skies were dark and angry and so were the villagers. Grumbles and moans hung thickly in the air, and their frowns were sharp as knife-cuts.
Tiny was starting to feel quite depressed herself. “What are we going to do?” she cried, turning to Penny-dog, “I can barely stand it!”
“Shall we play our favourite game?” thought Penny-dog.
“Oh yes! Smile Collector! Let’s start at the hospital.” Tiny was already feeling better.

They stood before the tall hospital windows, staring into the sea of tense, unhappy faces. On a count of three, Tiny and Penny-dog began the dance they had practiced many times before, twirling and whirling, grinning and giggling, and one by one, the frowns turned topsy-turvy and the mood began to lighten in the hospital waiting room. As each smile began to form, glittery cloud-puffs emerged from the heads of patients and visitors and filled the air above with sparkling golden light. Tiny and Penny-dog shared a high-five and set off towards the village . As they passed through the streets, their beams and waves and how-do-you-dos filled the chilly air with a delicious warmth. Madame Orly’s music class stopped singing the blues and turned to gospel, and even Old Man Guthrie managed a little grin.

As the day drew to a close, Tiny looked up to see how many smiles they had collected. There were too many to count, and the dark clouds had parted to reveal a glorious sunshine-streaked sky. It was going to be a beautiful day after all.