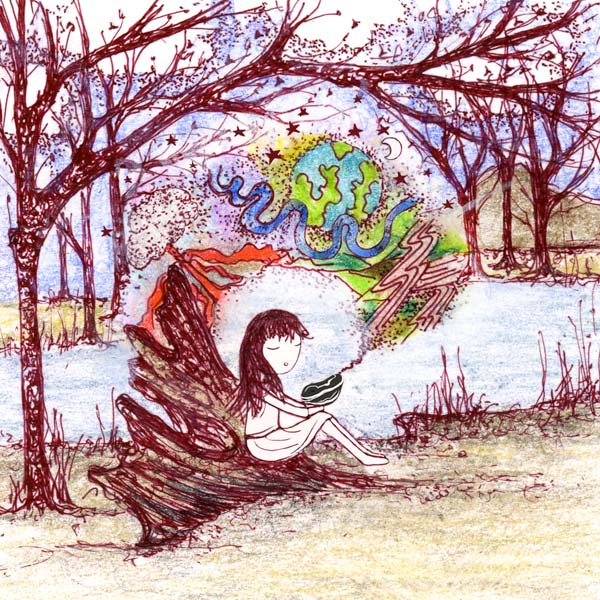 Tiny was ambling along the shores of Mirror Lake when she noticed the rock. She plucked it out of the icy water, and turned it over in her palm. It was smooth and black, with streaks of creamy white, and really quite handsome. She imagined it sitting on the fireplace, and felt a warm glow inside.

“I think you’d much rather come home with me, wouldn’t you?” She whispered to the rock, who remained silent. Tiny sat on a hulk of driftwood and stared into the dark waves, rolling the rock absently between her fingers. It began to warm to her touch, growing in heat, until she felt a sudden jolt of electricity race into her brain—blurring her vision, and sending her into a daze.

“You have a story to tell, don’t you?” she asked dreamily.
The rock began to rumble in her fist, “For millions of years I have traveled this path, from a land before time, and a world beneath water. My body was made from the stars, and my heart was forged from fire.”
Tiny’s hand began to burn, but she remained entranced.
“I saw the birth of the corals, and the algae, and the fish. I was crushed, and squeezed, and engulfed with silence. Then the dark shadow passed over this land, and life began again.”
“But what about the dinosaurs? Did you ever see one?” Tiny blurted excitedly.
“Well no, not personally. But there were dinosaurs. Lots of them, for a while at least.”
“Sorry, please carry on,” said Tiny guilty for the interruption.
“The sun burned, and the earth turned, and now I am here, in the palm of your hand.”

Tiny was thoughtful for a moment. The world was so much larger than she could have imagined. In that moment, she felt quite small.
She kissed the rock and placed it back in the water, “I think you are exactly where you need to be,” she said gently, and continued on her path.