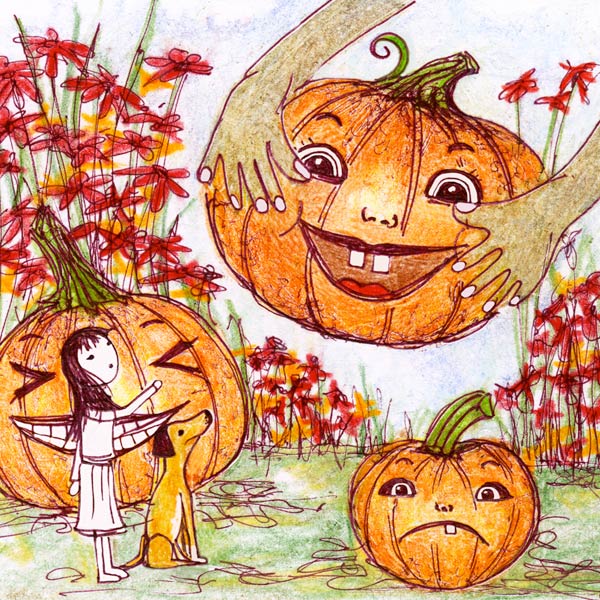 It was a brisk and sunny October morning, as Tiny and Penny-dog ambled through the village of Treetops. They stopped to wave at Apple Tree who swirled in the crisp autumn wind, her branches now light and empty. Further down the lane, strange noises were coming from Old Man Guthrie’s garden, where three plump and shiny pumpkins giggled excitedly.

“Hi pumpkins!” called Tiny, “looking forward to Halloween?”
“I’m going to be a ghost!” squealed the first.
“I’m going to be a witch!” cackled the second, making a scary face. The third pumpkin was quiet, its arms crossed upon its bright orange chest. Old Man Guthrie could be heard pottering in his shed, preparing for the harvest.
Tiny kneeled close to the little pumpkin, “Don’t you like Halloween?” she asked gently.
“No!” pouted the pumpkin, “I hate it!”

Gosh, this awkward, thought Tiny, sharing a glance with Penny-dog, whoever heard of a pumpkin that doesn’t like Halloween?
“I want to sit by the fire, drink apple cider and tell stories,” it added dreamily.
“Bhahaha!” laughed the pair, “the only place you’re going is the compost heap!”
“Hey, that’s mean!” cried Tiny, as a giant pair of hands swooped into the patch and carried one away.
“Wheeeeeee!” it screamed gleefully, disappearing out of sight. The hands plunged down again.
“Wahooooo!” sang the other, “See ya!” Old Man Guthrie’s footsteps faded into the distance.
“I only wanted to sit by a fire and tell stories of the pumpkin patch, I’ve even written a book you know,” said the pumpkin tearfully.

And with those words, its fate was sealed; no storyteller would be condemned to the compost heap.
“Looks like you’re coming home with us,” said Tiny, rolling the little orb onto Penny-dog’s back. The pumpkin smiled for the first time that day.

And so it came to be that the creatures of Wild Briar Wood’s Storytime-Sunday were treated to the first public reading of Pumpkin-Patch Diaries, and the dreams of a little pumpkin finally came true.