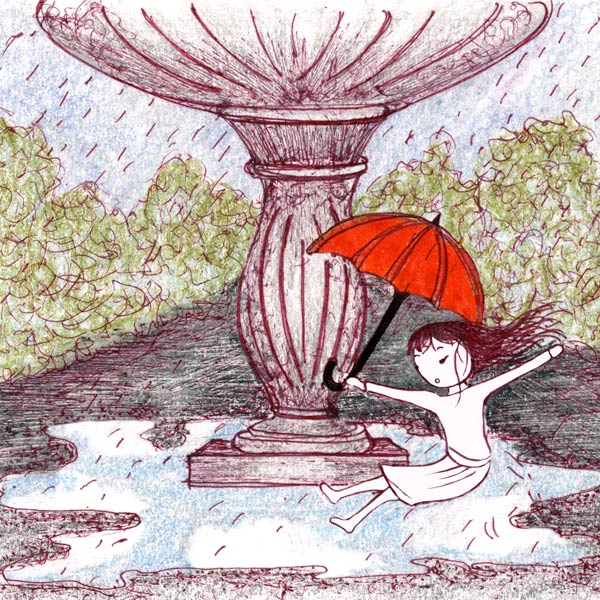 It was the third day of rain. Tiny grabbed her brolly and headed outside. Except for the gentle pitter-patter, it was eerily quiet. The world looked so different—glassy craters festooned the grass, and the flowerbeds were filled with rainwater.

Tiny headed towards the puddle beneath the birdbath, and jumped. But instead of a splash, she sank—tumbling past twigs, leaves and catkins, deeper into the chilled, dark water—until the light above her faded. To her astonishment, she landed in the courtyard of a miniature mud castle. A green tadpole glared from its throne.

“Greetings. I am the Puddle King.” He said, adjusting the crown upon his head.
Bubbles escaped from her mouth as she spoke, “Hello, I’m Tiny. Do you live here?”
“I am one of many puddle kings and queens, and this is my kingdom. ” He sat a little taller. Tiny had no idea whole worlds were hidden beneath the puddles. She waded a little closer. At that moment the sun appeared, sending shafts of golden light through the water. A dark thought shadowed her mind.
“What will happen when the puddle dries up, your Highness?”
The tadpole lowered his eyes, “We live by the puddle—we leave by the puddle. Others will take our place.”

Tiny felt her stomach clench at hearing his fate. The world outside felt so big and scary, but here in the puddle she could make a change.
“I think there might be a way out, if you’re willing to try.”
The Puddle King looked hopeful.
“Climb onto my back, and hold on!”
The tadpole slithered towards Tiny, and grasped her neck with his tail.

They swam to the surface, the puddle was already quite shallow. Tiny ran under the garden gate, and released him into Silent Creek. With a wave of his tail, he swam to freedom. Tiny waved back, and watched as the sun-rippled water became still again.
What she had done was a little thing—she knew—but in that moment, Tiny’s heart felt as large as she could remember.

For Mum: who had the kindest heart I have ever known xo