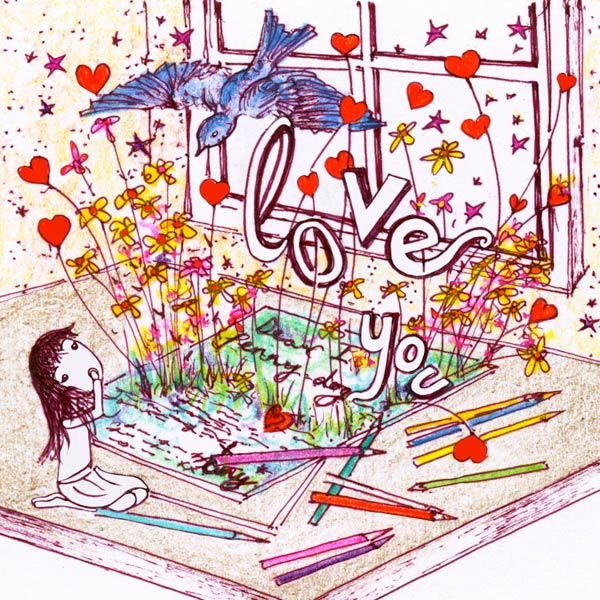 Tiny stared into the two golden suns, her best friend’s eyes were filled with love. She placed her small hand against the window, which Penny-dog covered with her paw. Only a thin sheet of glass separated them, but it felt like they were miles apart.
“When can I see you, Tiny,” whimpered Penny-dog, “I miss you.”
“Hopefully soon,” Tiny replied,” I miss you too.”
The light went out in Penny-dog’s eyes, and she crept away as a dark cloud formed above her head.
Tiny’s heart broke in two. She picked up the pieces up and placed them into her pocket.

It wasn’t just Penny-dog—she missed all of her friends—Dana-bear, Rocio, and Dr. Faith. She would have to do something positive; she would write them a letter. Tiny sat at the writing-desk and took out her special paper and pens. At the top of the first page she wrote, “Dear Penny-dog,”.
The words dripped slowly at first, then flowed into a steady stream. Soon the hopes and dreams, drawings and jokes poured onto the paper in a river of fire and gold, until there was no page left. She sat back and reread the letter.

As she read each word aloud, she stared in disbelief. The letter was coming alive before her eyes. The word ‘LOVE’ had pulled itself out of the page and was dancing in the space above her head. The flowers she had drawn grew straight into the air, and bloomed in cheerful shades of orange and yellow. And the bluebird she had sketched in her pale blue crayon, twittered around her hand before flying through an explosion of ruby love-hearts. Penny-dog was going to love it.
She folded the letter in half, being careful not to lose the bluebird; then slipped it into an envelope, before sealing it with a kiss. Reaching for a second sheet, she wrote, “Dear Dana-bear,”. . .