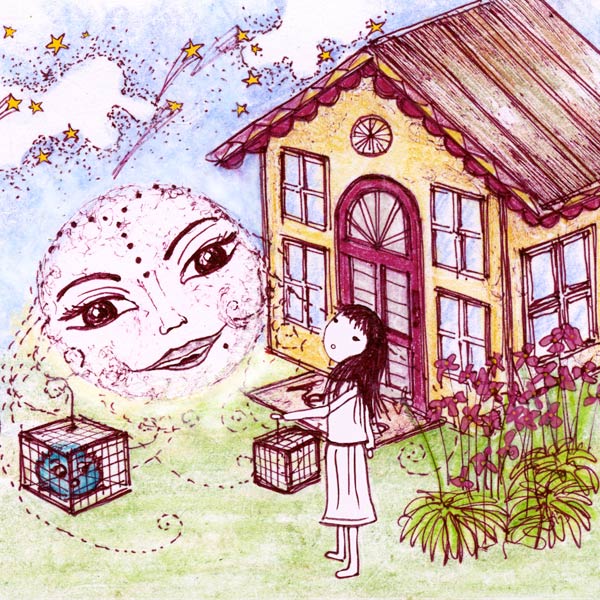 Tiny looked anxiously out of the window; it was very dark on the night before the Hunter’s moon, and Mother-the-Moon was nowhere to be seen. Tiny worried and paced; what if Mother-the-Moon had fallen out of the sky, or if her light had gone out and she needed help?  Tiny could bear it no longer, and grabbed her lantern to go in search of her friend.

A streak of sliver light flashed passed her in the garden, then another, whoosh. Mother-the-Moon was up to something. Finally Tiny caught her lurking in the shadows, dressed head to toe in a sparkling-silver camouflage, and carrying a pearly-white cage.
“Mother-the-Moon, are you alright? I couldn’t find you anywhere?” panted Tiny.
“Oh, I’m in fine fettle Tiny, I’m goblin-hunting!” replied the Moon, “There are rumors from Sweet Dreams HQ that a fear-goblin clan has been frightening little children and feeding them bad dreams before bedtime. The Sandman and I are laying out some traps!”
“Well if there’s anything I can do. . .” replied Tiny, eager for the Moon to finish her hunt and get back to the sky.
“Actually there is. Set a goblin trap in your bedroom, and we’ll blast the little boggart into space!”

Tiny placed the little cage by her bed that night with a pink marshmallow for bait, relieved to see her room flooded with moonlight again. In the morning, she woke up bleary-eyed with a head full of bad dreams. In the cage lay a fear-goblin, curled into a ball and snoring gently.

“I should turn you over to the Sandman!” said Tiny to the creature, who opened its sweet, sad eyes, and yawned. Her heart softened; no, this was her fear-goblin and she would deal with it in her way. Tiny looked straight into its eyes, and as she held its gaze, it began to dissolve into the air, leaving nothing but a wink and a smile. From now on she would be fighting her own demons.