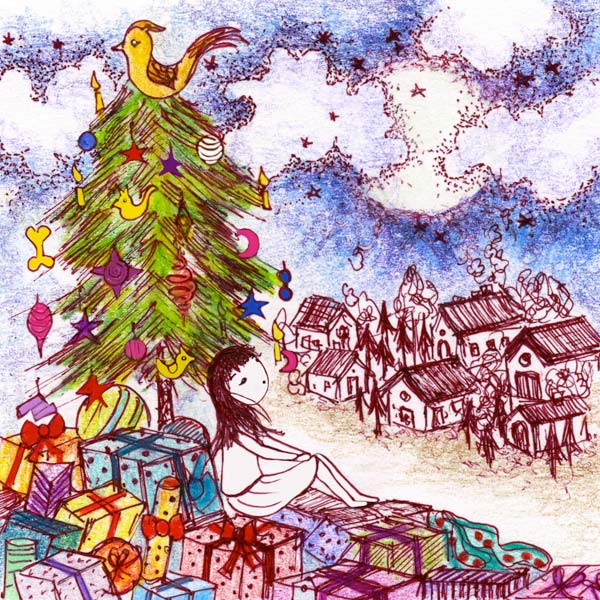 Tiny knelt in the fresh snow and placed her parcel under the tree. The Norwegian Spruce towered into the clear sapphire sky, delicately scenting the air with ribbons of sweet pine. The parcels looked so cozy as they jostled against one another, that Tiny crawled beneath the branches to join them.

The colossal tree was new to the village of Treetops, and part of a bold new experiment. There had been a growing concern that the holiday season was generous to some, and unjust for others, and so the residents voted to try something new. Instead of chopping down a hundred miniature evergreens, a single tree would be planted on the village green. And in place of the deluge of presents, each resident would prepare a single gift for a neighbor, to be distributed at the Feast of Midwinter.

Naturally there were grumbles, but it was the first gift Old Man Guthrie would be receiving in over a decade, and he could barely contain his joy.

Tiny looked around her as she sat on the mountain of gifts; kindness and generosity filled every space. The fir tree was overladen with homemade ornaments, and a shower of snow crystals released a thousand tiny rainbows into the air. The little bird in Tiny’s heart began to sing.

She closed her eyes to revel in the moment, and when she awoke, the Moon was rising from her slumber. Tiny thought of all the children sleeping under the stars that night, staring at Mother-the-Moon’s exquisite face, and praying for a miracle. She knew it was impossible, but she if she had just one wish it would be make their dreams come true.

The parcel she had brought began to giggle and twitch with excitement. She knew there little she could do for her friends across the globe, but with the Feast of Midwinter almost upon them, she could make the smallest difference for her friends in Treetops.