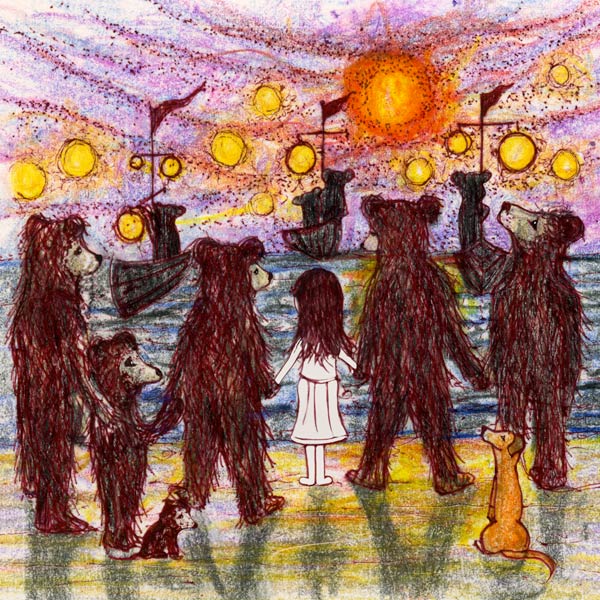 Tiny stared at the postcard which had arrived in the morning post. It read, “I’m here in Bearkin Bay. Please come soon! We need you! Love, Dana-bear.”
A frown wriggled across Tiny’s forehead. If Dana-bear was in trouble, she’d have to leave right away. Tiny looked at the map. Bearkin Bay hugged the beautiful Peace River, at the eastern point of the Wild Briar Wood.
Before the doubt-gremlins could creep into her mind, Tiny flew through the door, called on Penny-dog, and together they began the long trek towards Dana-bear.

Dusk was descending as they arrived at the boat dock. Half a dozen rowing boats bobbed in the glossy waves, as their warming orange lantern-light oozed into the growing darkness. Tiny nibbled at her fingernails. Something was wrong. All the Papa-bears huddled around the boats, as the remaining residents of Bearkin Bay watched from the beach. Brother-bears, tall-bears, sister-bears and short-bears, Mama-bears and baby-bears, ferocious bears, and best-friend bears waved solemnly—some weeping, others wailing—all with heavy hearts. One by one, the Papa-bears stepped aboard.
Tiny turned to Dana-bear. “Where are all the Papa-bears going?”
“It’s time for them to leave,” said Dana-bear. “Their warm hugs, strength, and protection are needed elsewhere.” He wiped away a tear, and cleared his throat. “They’ve been summoned, and so they must go. It’s the way of our world, Tiny.”
Despite the lump in her throat, Tiny managed to squeeze out her words. “What will the other bears do?”
“They’ll cry, and comfort, and in time they’ll heal.”

Tiny watched the boats drift from the dock. The glowing orange lights grew small, until finally swallowed by the setting sun. The evening chill pricked at Tiny’s wet cheeks. Something warm and furry closed over her right hand—Dana-bear’s paw sent a streak of sunshine into Tiny’s palm, which glowed like a fireball right into her chest. Tiny turned to see Sister-bear staring into the silence. She reached her left hand to grab Sister-bear’s paw, who in turn grabbed Mama-bear’s, then Baby-bear’s, and Brother-bear’s, until the residents of Bearkin Bay had formed an unbreakable chain around the cove.

Tiny stared at each of their faces. There was sadness, but there was also pride, and strength, and love. The Papa-bears had gone. But they would never be forgotten.