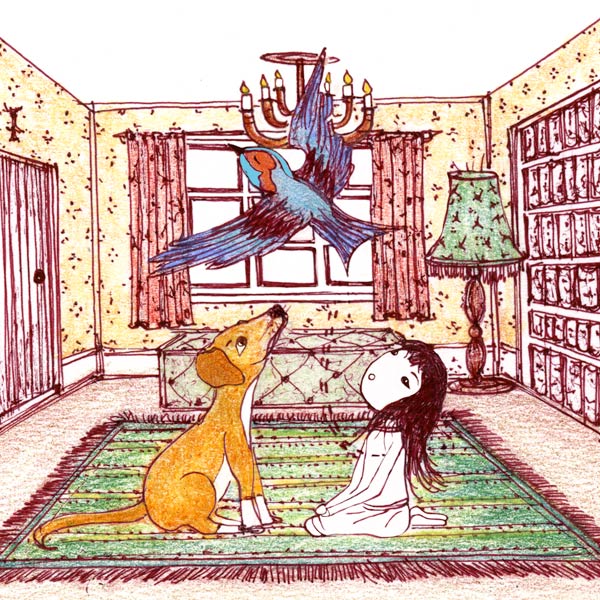 Tiny had woken up with a terrible case of the gloomies.  The skies were dark, the birds sang their saddest songs, and even the sun had refused to play.  She decided to take a walk through her beloved village of Treetops, but everywhere she turned, the world seemed to be breaking apart.

Just that week, Old Man Guthrie’s barn had set on fire, and Madam Orly’s basement had flooded, forcing her to move back to her sister in the city. The world was changing before her eyes and she felt powerless to stop it.

Tiny’s mind was a dark forest through which she ran and stumbled and tripped, desperately seeking the light.  She went back home and shut the door. As usual, Penny-dog was waiting, tail wagging expectantly. She felt the smallest flutter in her heart.
“Oh Penny-dog,” she said, nuzzling her soft warm neck, “I’m so happy to see you.”
Tiny looked straight into Penny-dog’s golden eyes—two benevolent worlds overflowing with love—as deep and endless as the universe itself. Tiny could not understand how she could feel such sadness and so much love, all at the same time. Her heart broke open and the smallest of birds burst out.

“Everything is going to be alright, Tiny. You’ll see,” thought Penny-dog.
“But how do you know?” she replied, her voice cracking.
Penny-dog looked up, her attention was drawn to the bird which fluttered happily around the chandelier overhead.
“What is the name of your bird?” thought Penny-dog.
“I don’t know. I never thought to ask.”
Tiny looked up and called to the bird, now pecking away at a dust-bunny.
“Excuse me bird, I’m sorry, I don’t know your name.”
The bird cooed and trilled, and finally sang out a clear and singular note.
“Hope. My name is Hope.”
“That’s how I know,” thought Penny-dog.