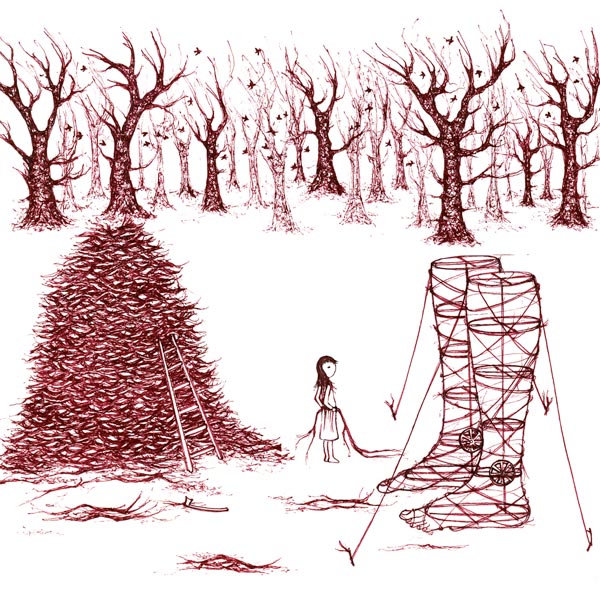 The lady inside Miss Rose’s telly-box said it had been the worst storm in 100 years. Tiny went outside to survey the damage, and felt dizzy with dismay. Treetops resembled the scene of a gruesome battle! Trees were ragged from fighting with the winds, and leaves and garden ornaments lay helplessly about the streets. She picked up a pink windmill which had traveled from the porch of Nigel and Mustafa’s yurt, all the way across the Misty Ripple Meadow. She would return it before they noticed it was missing.

The shortcut through the Wild Briar Wood was longer than she’d imagined, and Tiny picked her way through the casualties. The Protectors had been hit the worst, and their sad, sultry eyes blinked slowly as Tiny stepped over the felled giants.

“Poor birches. Let me help,” she muttered, picking armfuls of twigs from the ground. As she worked, the wheels in Tiny’s mind started to spin. And as she tidied, her imagination sprouted wings and began to take flight; one branch looked like a leg, another bough appeared like an arm. Clearing and building, shaping and weaving, she continued until a tall strong twig-creature towered before her.

Tiny stood back to admire her masterpiece. She was surprised to see that twilight had fallen, and the shadow-monsters would soon be starting their mischief. Tiny lay down to rest beside her creation, feeling safe in the light of Mother-the-Moon’s silvery glow.

As she slept, the creature stirred. And as she dreamt, the creature yawned, stretched, then opened its eyes. It gazed around the clearing, tested its weak and unsteady limbs, then stepped quietly into the forest. Tiny awoke at dawn to feel Mother-the-Sun’s warm caress upon her face. She looked around her, but the twig creature had gone. In its place, lay a warm nub of wood, sweetly scented, and carved into a shape of a heart. She slipped it into her pocket, and grabbing the windmill, hurried along her way.