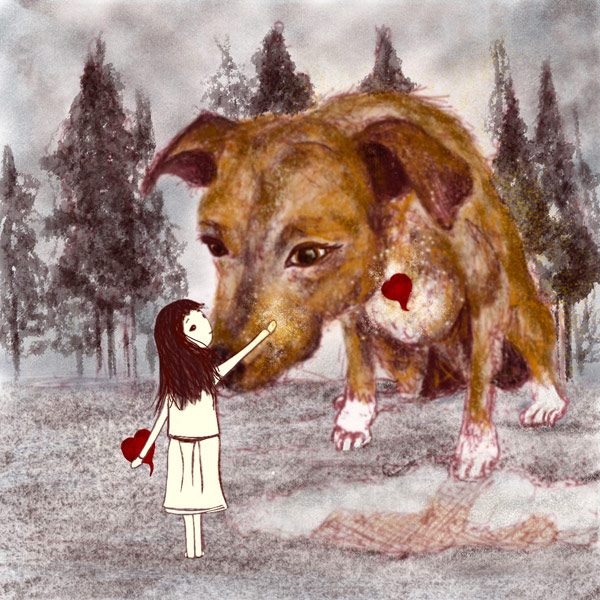 Tiny stood at the rain-streaked window, gazed into the angry dark clouds, and let out her heaviest sigh. She had waited all week for this special day—an adventure with Penny-dog, a backpack full of snacks, and the freedom of a day spent outdoors. She stared at the sorrowful sky, hoping it would change. It didn’t. Well, it was only a spot of rain, what harm could it do?

Tiny and Penny-dog scurried down the lane, avoiding the blossoming puddles. But as they approached the Wild Briar Wood, Tiny sensed that something was wrong. Penny-dog was quieter than usual, and not her usual playful self. A spiteful wind scratched at their faces. Penny-dog trembled, rooted to the spot.
Tiny turned to face her. “What is it Penny-dog?”
Penny-dog’s eyes widened, her chestnut muzzle twitching. After a pause, she thought, “I don’t like the wind. It’s scary.” Tiny’s heart felt hollow. She had forgotten how much Penny-dog hated the gloom. She walked beneath Penny-dog’s towering frame, reached up her hands, and stroked the soft freckle-belly fur. Gold sparks flew from Penny-dog’s coat.

They walked a little further. The clouds appeared to be drifting, but soon a chill rain drizzled around them. Penny-dog stopped, ears pinned back against her head.
“What’s wrong now?” whispered Tiny, trying to mask the worry in her voice.
“I don’t like the rain. It feels cold,” she whimpered.
Tiny bit at her lip. She moved into Penny-dog’s shadow, and rubbed the feathery gold hairs of her ribcage, until a light glimmered in her amber eyes.

The rain ebbed away. They continued their journey. But after only a few steps, Penny-dog gave a miserable howl. “I love you so much my heart hurts!” Her head hung so low, she could kiss the sodden earth.
“Oh my Penny-dog,” Tiny soothed. There was one thing left to try. Tiny stepped onto Penny-dog’s paw, stood on tippy-toe, and kissed the swirl of fur that protected Penny-dog’s heart. “There, a magic kiss. So you know I’ll always love you. Come on, let’s go home.”
Penny-dog’s lips curled into a smile. Tiny’s plans had washed away with the rain, but one thing was certain—the day was already perfect.