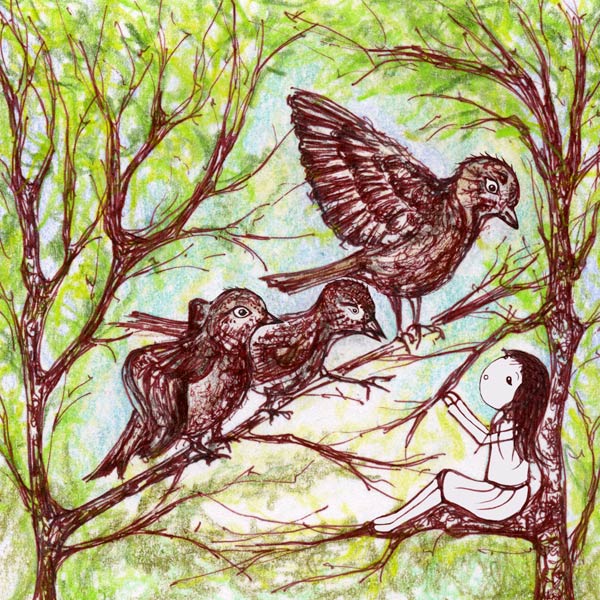 Tiny stood beneath the butterfly-bush and closed her eyes to savor the stillness of the morning. It wrapped around her shoulders like a gossamer shawl. A shrill cheep soon pierced through the silence. Tiny looked around her—it was coming from the ivy that clambered across the walls of Willow Tree Cottage. Peering into the tangle of twisted vines, she spotted three little birds singing an unfamiliar song.
“Nobody likes us! Everybody hates us! We’ll sit in the garden, eat worms!”
Tiny’s eyes widened with horror. What an awful song! She scrambled up the trellis until she reached the birds. “Excuse me, why are you singing that sad song?” she said panting. “Nobody hates you. You are all so lovely!”
“We’re awkward,” chirped one bird.
“We’re ugly,” tweeted another.
“We’re dreary, and boring, and small,” sang the third.

Tiny gazed at the trio, and felt her cheeks flush. It was true they were plain, and not as elegant as the other birds. But everyone had their worth, and she was determined to find out what theirs was.
“You little birds are unique!” She blurted.
One bird cocked its head. Another raised an eyebrow. The third crossed its wings.
Tiny pursed her lips, thinking back to the World of Beautiful Birds book she’d read last week, relieved to remember the chapter, Our Special Sparrows. She took a deep breath and began. “Did you know that sparrows can fly really fast—as speedy as a charging elephant!”
They stared at her in disbelief.
“And they can swim underwater. That’s unusual for a not-water bird!”
Their beaks fell open, and they stood a little taller on the vine.
“And in Japan,” she continued with a flourish, “sparrows are a symbol of loyalty, as they are so friendly!”

The birds puffed out their soft downy chests, their feathers now glittering with bronze and pearl. They turned to face each other, trilled in angelic harmony, and with the next breath of wind, soared into the early spring air.
Tiny beamed as she waved goodbye. Everyone is special, she thought, especially little brown birds.