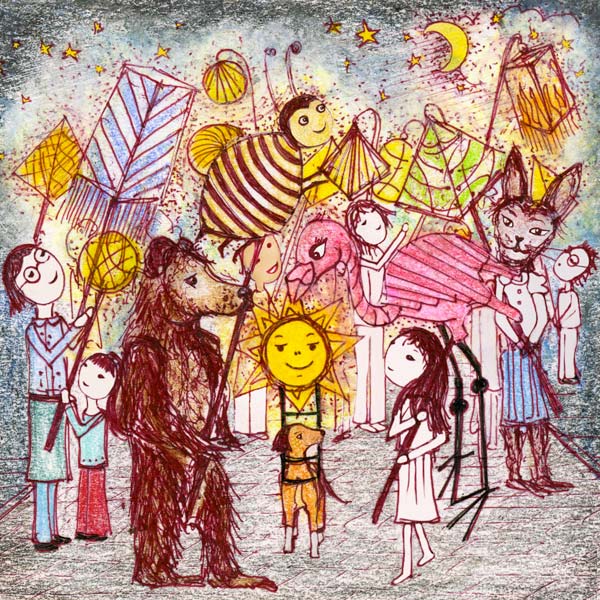 It was almost time for the Treetops Lantern Festival, the final hurrah before the Feast of Midwinter. Tiny had been building her lantern for weeks; a glorious pink flamingo with a long swirling neck and a candy-cane pattern. She suspended it from her pole, and turned on the light. It set the room ablaze like a sunrise over the ocean, and her heart fizzed with delight.

Tiny opened her door and stepped into the bustling street. All around her the villagers beamed, and clutched at lanterns that peppered the darkness with a luminous magic.  Beside her, Penny-dog carried a glowing sun, and Dana Bear wafted a giant honey-bee high above their heads.

As night closed its curtains on the village of Treetops, a thousand silver stars took their places in the sky, eager to witness the joy unfolding below. Soon the drums began to pound, as the parade flowed through the town like a river of light.

Tiny gazed around, and noticed a dark square on the horizon. It appeared to be the Evergreen Home for the Elderly. She felt a stab of sadness for the residents, too frail to venture outside. If the Elders could not come to the parade, then perhaps the parade could visit the Elders?

The idea streamed quickly through the crowds, and the parade snaked once around the village green, then disappeared out of sight. One by one the blackened windows came alive–a giraffe, a turtle, a flying saucer–soon followed by the smiles of the wizened old residents. It was hard to tell which were brighter.

Tiny felt as though she was locked inside a dream, floating on an invisible cloud. A single tear cascaded down her cold cheek, holding the light of the world around her. She had never felt more alive. She blinked three times and took a snapshot for her box of memories; this was a moment she would treasure forever.