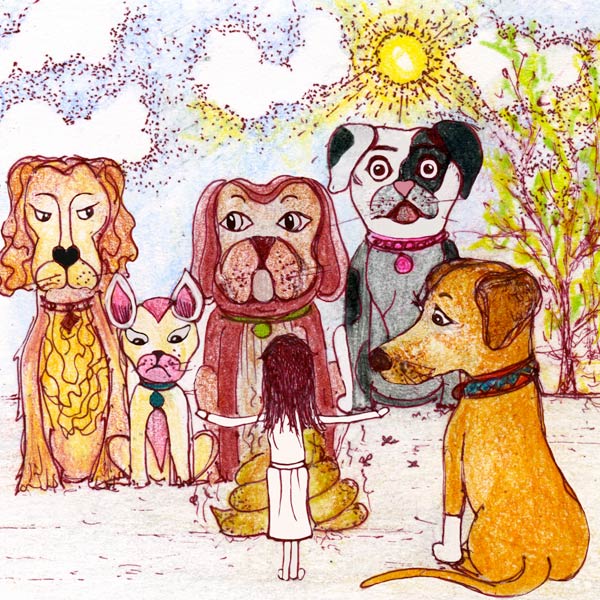 “Ewwww!” Tiny’s face screwed up in disgust, “that’s gross!”
Penny-dog winced. Sitting on the pavement was a gigantic steaming curl of dog-mess. It glistened in the morning sun, and gave Tiny a greasy smirk.
“What’s this doing here?” bellowed Tiny, “We have to get to the bottom of this. . .”
Penny-dog tittered. Tiny glared back.
“Was it you, Penny-dog?” Tiny’s face was turning a peculiar shade of raging-red.
“No! Never!” thought Penny-dog, horrified at the thought.

It was time for an emergency meeting. In less than an hour, the neighborhood dogs —Skeeter, Honeybun, Gloria and Moe —stood solemnly around the stinking mound.
“As you can see Friends, we have a situation,” said Tiny gravely, “Does anyone know which doggy has deposited this do-do?”
Two of the suspects began to snigger. Tiny’s stare was as cold as stone. The dogs eyed each other suspiciously . After an uncomfortable silence, Skeeter confessed.
“I’m sorry, Tiny. I always ask Mistress to pick up, but she never hears me.”
“Master is the same!” blurted Honeybun, “And sometimes he bends down, and just pretends!”
There was a collective gasp of dismay.
“Well, Penny-dog and I have had an idea. Next time your human chooses to soil the street, we ask that you sit down in protest until they learn that rule #1 is to pick up #2!” The dogs barked and howled in agreement, and Tiny relaxed.

In the following days, Honeybun protested three times; Skeeter twice—and never one to miss the fun, Moe rolled over and played dead—much to the confusion of Mrs. Garcia. But within a week, the streets of Treetops were sparkling, and the plan had been a success.
“Case closed, Penny-dog!” said Tiny, as they took a moonlit stroll to celebrate. “We make a good team, don’t we?”
“We could call ourselves Hero and Lane: Detective Agency,” thought Penny-dog, imagining wearing her own deerstalker hat.
Tiny giggled, and put a loving arm around her friend. “You could be onto something there. . .”