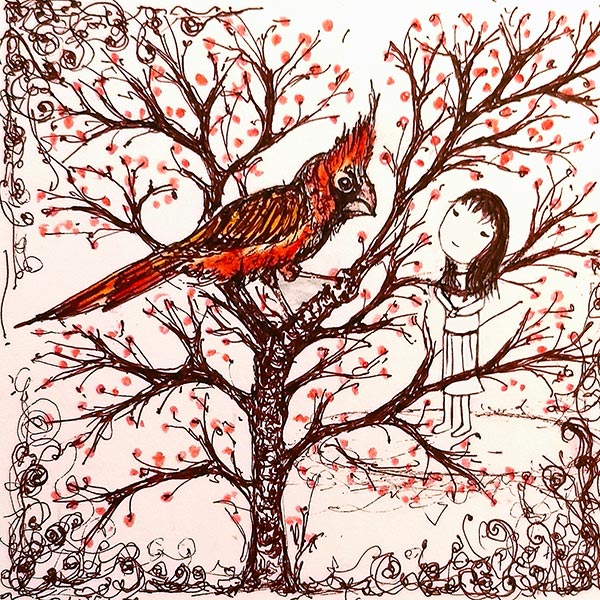 Tiny was excited to have been invited to Esperanza’s thanksgiving lunch. She’d heard so much about the fancy origami napkins and the special cheese-plate, and Esperanza was a wonderful cook.  It was all perfectly lovely, but something was missing. She couldn’t put her finger on it; all her favourite people were gathered around the table and the house was scented with the warm, spicy flavors of the season.

Tiny excused herself and slipped outside to breathe in the crisp November air. She stood still for the briefest of moments, and studied the scene before her. Snowflakes gently tumbled from the sky before kissing the ground, and a cardinal flashed red in the frosted burning-bush. Time stood still. She marveled as Mama-doe guided her fawns across the meadow, and smiled at the thought of Mama-bear holding her sleepy cubs in the darkness below her feet.

Tiny felt a wave of gratitude wash over her. It filled her senses with its silent embrace, carrying a scent of woodsmoke and leaving a trace of toasted caramel. All around her the world was giving so much and taking so little in return.

What did she have to give? Her pockets were empty, and her hands were bare. She could think of only one thing, and so she closed her eyes, touched her fingers to her cold lips and blew four kisses. She cast one into the wind, threw one into the icy river, placed the third upon the earth, and tucked the last between the fire berries, hidden until discovered. Tiny whispered a ‘thank you’ and hurried inside for the feast.  What was missing had been found.